the underwater world of 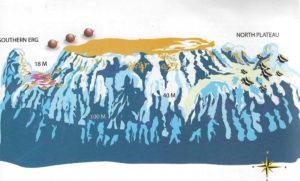 Abu Kifan is a long thin strip of reef 90 minutes to 2 hours outside Safaga. Its name roughly translated mean ‘The Deep One. “When you dive it, you will see why. Its walls plunge vertically from the surface past the 100m mark. To the north, a plateau stretches seawards with two prominent coral blocks down the middle. At the south is a large and colourful erg which joins the main reef at approximately 18m. Beyond it the reef stretches interminably southwards at 30m. 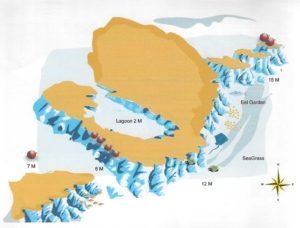 Just north of Shadwan Island and about 20 minutes from Safaga is a large round reef known as Gamul al Kebeir. At its centre is a perfect, circular lagoon. To the south is a long nondescript reef and to the northeast are three small and colourful ergs. All around are sea grass beds. 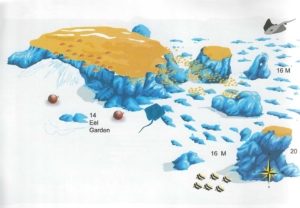 Less than 15 minutes outside Safaga lies Gamul al Saghir. It is the second in a chain of reefs stretching northwards from Safaga Island. It is round in shape with four outlying ergs to the southeast. Only two can be seen from the Surface. 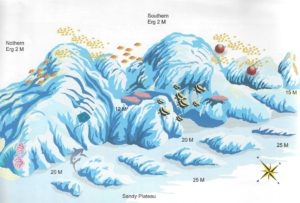 MHal-Hal is a fisherman’s expression meaning restless sea and it’s true, the sea is almost constantly choppy here. Two ergs push up from the edge of a plateau to about 3m short of the surface and offer no protection. They lie about 400m southeast of Middle Reef. On the inside (west), the plateau has 16m depth, whilst on the outside it drops to a wide ledge at 22-24m. This ledge has a drop-off about 80m cast which is vertical, if not overhanging and starts at 30m. Hal-Hal is also known as Shaah Kweiss (meaning “Nice Reef”) but then so is any reef in The Red Sea that your skipper has forgotten the name of. 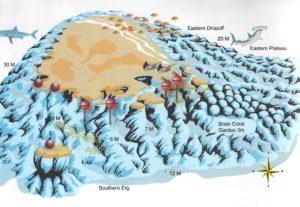 90 minutes to two hours outside Safaga, Middle Reef is a very large circular reef with dozens of small, shallow ergs on its southeast corner. On the north and west sides are coral gardens that drop off at approximately 30m. To the south is a lone erg standing in 20m water. On the east side a wide plateau stretches out as far as Hal-Hal nearly 500m away. It is covered by one of the most scenic hard-coral gardens in the Red Sea. It too has a drop-off, but a long way to the northeast of the main reef. 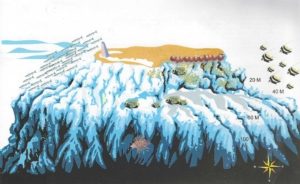 Panorama is also known as ‘Abu Alama” meaning ”Father of the Mast.” This is a reference to the concrete pillar which once marked its northern shores but has now been replaced by a hi-tech automated beacon. It lies 60-90 minutes (weather dependent) outside Safaga. It is an elliptical shaped reef on a northwest-southeast axis. On the north end is a dramatic plateau (15-25m) and drop-off. Down the east and west sides runs a narrow sloping ledge at the same depth. 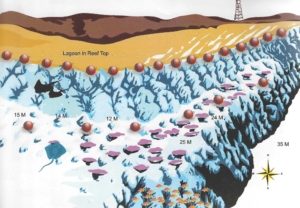 as Abu Soma is the headland that defines the northern limit of the bay of Safaga. There are two dive sites here, Abu Soma Gardens on the inside and the “Ras” itself (illustrated). Both take about 45 minutes to reach by boat. The “Ras” has a steep outer wall that merges with a 25m plateau to the south. The place is virtually a carbon copy of Small Giftun in Hurghada, except the gorgonians are replaced with large table corals. 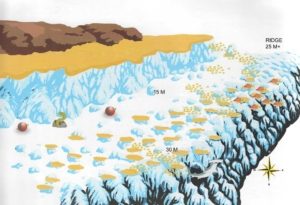 About 60-90 minutes north of Hurghada, Abu Nugar is composed of a long t-shaped reef to the west and a shallow plateau dotted with ergs to the east. Diving takes place on the most south-easterly ergs (Shaab Ins), two large central ergs (Gota Abu Nugar), or on the north side of the tongue pointing west from the main reef. The name Abu Nugar literally means “Father of the Pools” and refers to several clear blue lagoons in the reef top. 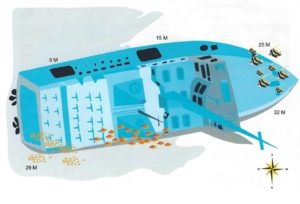 About 90 minutes from Safaga, south of Shaab Shehr. This wreck sank on December 15th 1991, she hit the Hyndeman reef ripping a massive hole in the hull. The Salem Express is 110m long and 18m wide. She lies at a depth of 12-33m. 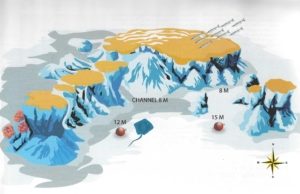 Shaab Claude is the second in a chain of small reefs that extend southward from the east end of Shaab Sheer. It has one prominent erg to the south east, whilst on its southwest corner is a long ridge composed of several ergs that have grown together at the top. Between them are swim-throughs in the 4-6m range. The whole reef stands on a sandy seabed at 15-l8m. 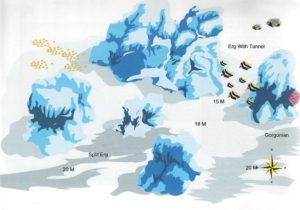 At the southernmost point of the large shallow plateau surrounding Shaab Shehr lies Shaab Hamdallah. It is a collection of tall ergs that rise up from 18m. They are arranged in roughly the same positions as the dots making up the five on a dice. The central erg is the smallest, but perhaps the most colourful, being richly swathed in soft coral. The southernmost is steeply overhung and sports a lavish growth of gorgonians. The largest erg is the northern one which has a soft coral lined tunnel through its middle, and to the west is a split erg through which you can swim. 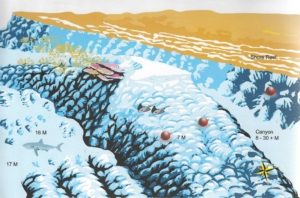 About 3-4 miles north of Ras Abu Soma is another headland known as Ras Umm Hesiwa. To the northwest of here in the direction of Sharm el Nagar is a little known reef called Shaab Samman. A hard coral ridge runs parallel to the shoreline and is separated from the main reef by a narrow, sandy canyon. At its shallowest point, the canyon is 8m though in either direction it slopes gently to greater depths. The ridge itself has a high point at 2m and, like the canyon, it too tails off at either end into deep water. On the seaward side of the ridge is a broad plateau between 15 and 20m deep. 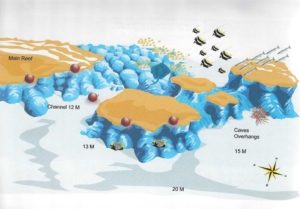 Around 70 Minutes from Safaga. On the admiralty charts it’s known as Hyndeman reef (that name is no! used locally) and the name Shaab Shehr is attributed to Abu Kafan. These are fishermen’s names and are older than the admiralty itself. So forget the charts.  The reef is a horseshoe shape over 1km long. It is an excellent anchorage with three excellent dive sites close at hand and 6 others within easy reach by zodiac. The illustration shows the east end of Shaab Shehr where three ergs form a channel with the main reef. Outside is a vast brain coral garden with a lunar atmosphere and in the three ergs arc some superb caves and grottoes. 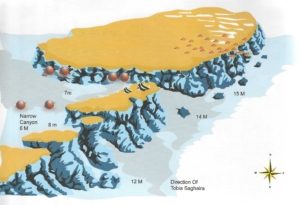 Ten minutes southeast of Tobia Island and only 30 minutes from Safaga is one large oblong reef with a chain of three ergs stretching southwards. The west side stands in 6-7m water and is naturally dead, like a lagoon. The east side shelves to 15m and catches enough current to be quite colourful. 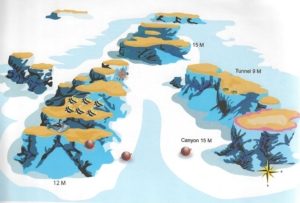 Thirty minutes cast of Safaga three chains of connected ergs come together to form an inverted Y-shape. They stand in 12-15m water on a white sand seabed and pose a navigational nightmarre for the average diver arme with anything less than a submersible GPS. To the north they join with Tobia Kebir. 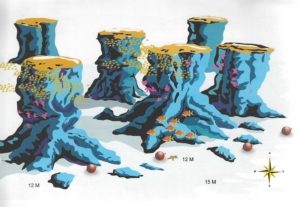 Just inside the headland of Ras Abu Soma is a closely packed clump of erg known as Tobia Arbaa, Arbaa means four but there are actually seven of them, hence their other name “The Seven Pinnacles”. As ergs go, they are unusually tall and narrow and they stand on a sandy seabed at 12m like a forest of sawed-off tree trunks. 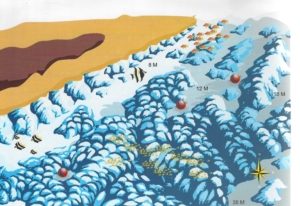 About 30 minutes outside Safaga is a long reef topped at the south end by a sandy island (Tobia Island).  At the north end is a long low rocky island and to the east of this is the dive site. The reef slopes gently to 30m as a series of hard coral ridges and sandy roads.